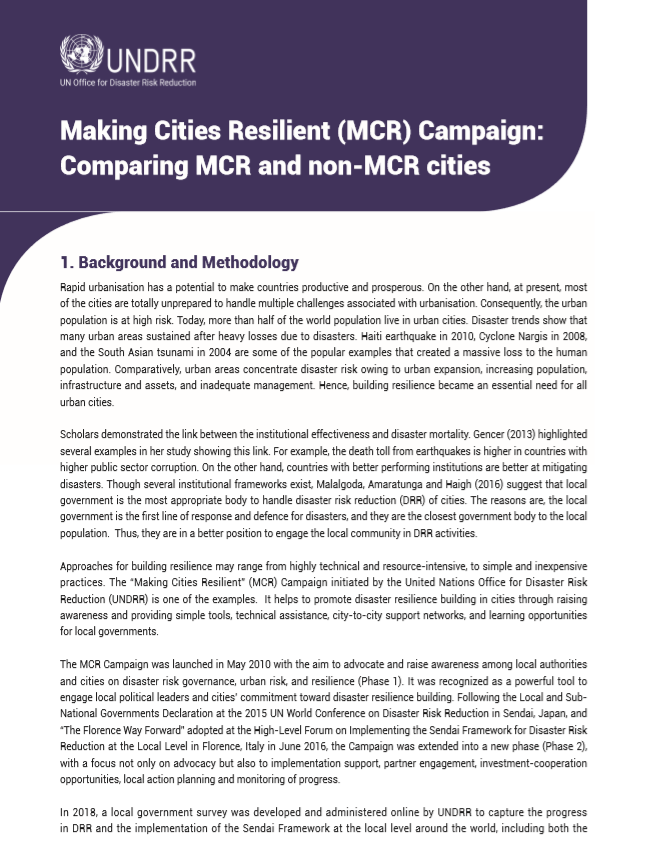 Approaches for building resilience may range from highly technical and resource-intensive, to simple and inexpensive practices. The “Making Cities Resilient” (MCR) Campaign initiated by the United Nations Office for Disaster Risk Reduction (UNDRR) is one of the examples. It helps to promote disaster resilience building in cities through raising awareness and providing simple tools, technical assistance, city-to-city support networks and learning opportunities for local governments.

The MCR Campaign was launched in May 2010 with the aim to advocate and raise awareness among local authorities and cities on disaster risk governance, urban risk and resilience (Phase 1). It was recognized as a powerful tool to engage local political leaders and cities’ commitment toward disaster resilience building. Following the Local and Sub-National Governments Declaration at the 2015 UN World Conference on Disaster Risk Reduction in Sendai, Japan, and “The Florence Way Forward” adopted at the High-Level Forum on Implementing the Sendai Framework for Disaster Risk Reduction at the Local Level in Florence, Italy in June 2016, the Campaign was extended into a new phase (Phase 2), with a focus not only on advocacy but also on implementation support, partner engagement, investment-cooperation opportunities, local action planning and monitoring of progress.

In 2018, a local government survey was developed and administered online by UNDRR to capture the progress in DRR and the implementation of the Sendai Framework at the local level around the world, including both the cities participating in the MCR Campaign and those that are not.

The survey included 58 questions about the local governments, local risks and understanding of risk, risk communication, local DRR strategy, strategy implementation, and DRR actions and experience. Taking part in this survey was an opportunity for cities to showcase their good practices and contribution to the advancement of global frameworks such as the Sendai Framework and the Sustainable Development Goals.

This report attempts to explain the results of the survey, particularly the comparative analysis between the progress of the cities participating and not participating in the MCR Campaign.