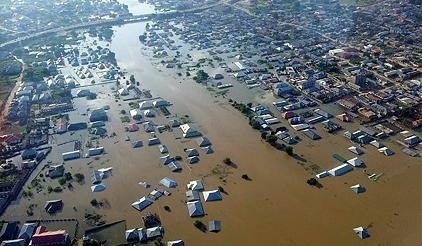 "Ensure the creation and updating of disaster response plans are informed by risks identified in essential 2 and communicated to all stakeholders through use of organizational structure as per essential 1."

Well-conceived emergency preparedness and response plans not only save lives and property, they often also contribute to resilience and post-disaster recovery by lessening the impact of a disaster. Preparedness efforts, early warning systems and communication systems will help ensure that cities, communities and individuals threatened by natural or other hazards can act in sufficient time and appropriately to reduce injury, loss of life and damage to property and fragile environments. Sustainability can be achieved if the community itself and local authorities understand the importance of and need for local emergency preparedness and response.

Jakarta, Indonesia, a coastal city and the exit point of 13 rivers, is highly at-risk for floods. Some 40% of Jakarta lies below sea level and the provincial authority area includes 110 islands. Hydrometeorological hazards have caused much damage in coastal areas and in residential areas near the river banks. During annual and ﬁve-year ﬂoods, Jakarta has lost billions of dollars’ of investment in building and infrastructure. Integrating improvements into the ﬂood early warning system for Jakarta has been a true multi-stakeholder process, involving a broad range of local authorities and partners. By managing everyone’s interests and roles and improving coordination, the early warning system was upgraded from top to bottom. Technical improvements mean that earlier ﬂood warnings can now be issued. But more importantly, preparedness capacity has been built and streamlined. Key coordination hubs and standard operating procedures have been established and tested with comprehensive drills, so that institutions and communities are now more ready to act on warnings.
For more information: http://www.unisdr.org/we/inform/publications/13627 (page21).

Located in heart of the National Capital Region of the Philippines, Makati City is home to the vibrant and bustling central business district, housing the top corporations in the country, and making it the financial capital of the Philippines. The city’s dynamic social and economic growth required significant improvements to its services to ensure the safety and security of its constituents and in 2006, then Mayor and now Vice President, Jejomar C. Binay, established Makati Command, Control and Communication (Makati C3) to serve as the city’s Emergency Operations Center. It was tasked with monitoring, coordination, and the integration of services and resources during disasters and emergencies.
The Makati C3 was placed under the leadership of then Councilor, now the City Mayor, Jejomar Erwin S. Binay, Jr. who sought to continually improve the delivery of efficient and timely services by adopting an emergency 3-digit access number, 168, and upgrading technical equipment, including a Geographic Information System and video surveillance. Makati C3 enhanced the operational capabilities and standards of its staff by engaging with international organisations such as the ASEAN, INSARAG, and UNDAC. Strong linkages were also established with national, regional, local, and non-governmental organisations as well as with the private and business sectors.
Within the city, Makati C3 takes an active role in risk-sensitive land use planning and community-based disaster risk reduction and capacity building programs for the barangays and other stakeholders, as part of its mission to create safer and disaster-resilient communities. Furthering its commitment, Makati supports many other cities and municipalities through its services and aims to set up a national training centre.
Read more at: http://tinyurl.com/7su6wtw

Tools and Resources
Back