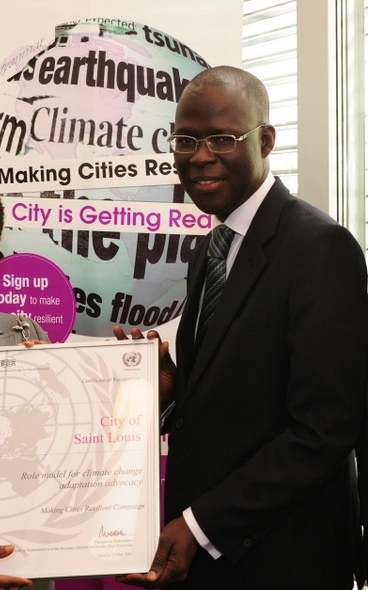 Cheikh Mamadou Abiboulay Dieye, Mayor of St. Louis
Poverty and vulnerability are not a fatality. People are not irreversibly condemned. People just do not mobilize the internal and external resources available to address the issues they face. Our predecessors fought to leave us with a heritage and it is our responsibility to preserve and promote it for the next generation.

Downloads and Links
Nomination From
Saint Louis is Getting Ready

HAZARD AND VULNERABILITY PROFILE The main risks in Saint Louis are:
Floods; Coastal erosion; low rainfall; heat; greenhouse effect; progress of the sea into the land; disappearing of the mangroves; progressive salinity of the waters; economic vulnerability due to the scarcity of sea food; waterborne diseases ( bilharziosis and malaria; overflooding and regular sea overflow;

Saint Louis is surrounded by low-lying floodplains and marshes while also sitting on the edge of the Sahel. As a result, the city is plagued by periods of drought throughout much of the year and by flooding during the rainy season when the river overflows. Risks are likely to be further exacerbated by climate change, both from a rise in sea level and increased water flows in the river.

Heavy rains in 1998 and 2000 flooded almost all of the city’s districts. Thousands of people were seriously affected, suffering from diseases linked to unsanitary conditions. Recurrent flooding every year due to heavy rain fall also triggers a slow-down in the economy and in educational activities as floodwaters invade houses as well as schools constraining people’s movements.
In 2008, UN-Habitat designated Saint-Louis as the city most threatened by rising sea levels in the whole of Africa, citing climate change and a failed 2004 river and tidal canal project as the cause.
All stakeholders are part of the implementation of the strategies adapted to address the issue. Saint-Louis population has been at the frontline and responded to the call of the municipality. The Mayor calls on Government authorities and the international community to be more involved, as it is a common responsibility to address a threat to the future of Saint-Louis and to human heritage in general.

DISASTER AND RISK REDUCTION ACTIVITIES Some areas of Saint Louis should not have been settled because of the risk of flooding combined with inadequate or no drainage networks. Given that there is not much land left in the municipality for building, flood-prone areas pose enormous problems for residents and the authorities responsible for urban management. To improve the situation, regional services have focused their attention on awareness-raising campaigns and building capacity among all stakeholders and decision-makers to help prepare the city’s inhabitants for future flooding. The government together with NGOs, regularly maps existing and potential flood zones, particularly analysing remote sensing data in the Senegal River delta. This information is shared with the local population. Additionally schoolchildren, teachers and the community are trained in risk management

Earth Reporters - My City and Your City

Earth Reporters - My City and Your City

Mayor of Saint Louis Interview
Back